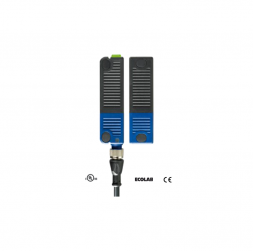 The RSS36 is also difficult to by-pass because it has the option of individual coding: The basic version of the sensor responds to any RSS36 target actuator; The “I1” version only accepts the coded ID number of the specific target actuator which is taught in during the first start-up; The “I2” version allows the teach-in process to be repeated, allowing replacement of a lost or damaged actuator.

The RSS36 also features all of the diagnostic advantages of our Pulse Echo sensors. With continuous internal function tests and monitoring of the safety outputs, RSS36 sensors can be wired in series without detriment to the safety levels. The RSS36 comes standard with diagnostic LED’s on the sensor to indicate various errors, mis-alignment and door open/closed signaling. For more advanced indication the RSS36 is also available with serial diagnostics.

The RSS36 housing is made of ECOLAB approved materials and the ST version is sealed to IP69K standards – a viable solution for use in hygienic or outdoor environments where high temperature and high pressure wash downs are typical.

The RSS36 also offers a magnetic latch option which provides a holding force of 5 lbs. The RSS36 can be used as a door stop for small to medium sized guard doors.

The RSS36 sensors meet stringent North American and European Standards, are cULus and CE approved, and can be used in the highest level of machine safety circuits, PLe to ISO13849-1 and SIL 3 to IEC61508.